In Q4 2016, the number of regulatory actions increased by approximately 29 percent, driven by a 100 percent increase in actions by other regulatory bodies (36 actions this quarter versus 18 in the prior quarter), which consist of actions by the U.S. Department of Justice (“DOJ”), the Department of Housing and Urban Development (“HUD”), as well as various state and local regulators. The Consumer Financial Protection Bureau (“CFPB”) continued to remain active, accounting for nearly 20 percent of all actions. A noteworthy change in Q4 2016 was the type of action levied. The instances of lawsuits in this quarter were more than four times the total observed in the previous four quarters, demonstrating a diminishing willingness of financial institutions to settle in the face of accusations of wrongdoing. Also of note, the CFPB paid special attention to pawnbrokers in Q4 2016, with approximately one-third of its actions levied against this type of institution — a financial institution type that is not often represented in regulatory actions. Further details of Q4 2016 actions and trends are provided below.

Frequency of regulatory enforcement action increased from Q3 2016 to Q4 2016, as seen in Figure 1, to nearly the level of action observed in Q4 of 2015, which had the highest instance of enforcement action of the five periods under review. Actions by other regulators doubled this quarter and were 20 percent higher than any other quarter in the review period. The increase is being driven both by increased DOJ and HUD actions, as well as more activism at the state and local level, the latter of which may be a direct response by blue states to the change in the administration. Half of enforcement actions were issued by the four major agencies, with 13 from both the CFPB and Federal Deposit Insurance Corporation (“FDIC”), three from the Office of the Comptroller of the Currency (“OCC”), and seven from the Federal Reserve Bank (“FRB”) (See Figure 2). This is the lowest proportion of actions coming from the four primary federal regulators in the last five quarters. The CFPB’s actions centered around unfair, deceptive, or otherwise improper lending practices in violation of the Truth in Lending Act (“TILA”), and European Free Trade Association, while the FDIC, the OCC and the FRB issued actions for violations of rules and regulations including Bank Secrecy Act/Anti-Money Laundering (“BSA/AML”), compliance with capital adequacy requirements, and the National Flood Insurance Program. Unfair, Deceptive, or Abusive Acts and Practices (“UDAAP”), BSA/AML-, and mortgage lending-related violations accounted for the highest numbers of actions in Q4 2016, as evidenced by an increase in actions related to Fair Housing Act and Regulation AB: Asset-Backed Securities & Residential Mortgage-Backed Securities (“RMBS”). 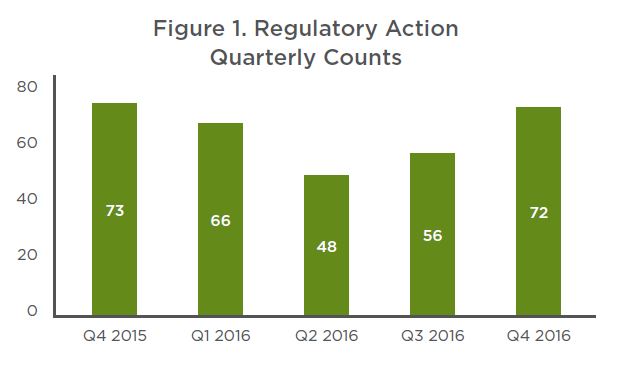 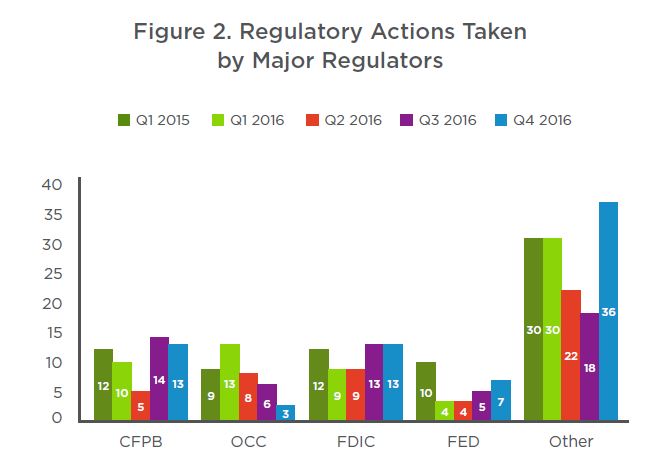 The instance of lawsuits brought by state and federal regulators against financial institutions has spiked dramatically in this quarter from the prior four periods. Fourteen lawsuits were filed in Q4 2016, half by the CFPB, related to alleged violations of several regulations, including UDAAP, TILA, Regulation AB, and the Fair Housing Act. This trend continued into January 2017, as the CFPB filed suit against Navient, the nation’s leading student loan servicer, alleging that the lender failed borrowers consistently throughout the repayment process. Guidehouse believes that this trend demonstrates a decreasing willingness of financial institutions to settle with regulators when allegations of wrongdoing are made, forcing the regulators to file suit to seek redress.