Frequency of regulatory enforcement actions decreased from Q4 2016 to Q1 2017, as seen in Figure 1, to a level comparable to the frequency observed in Q1 2016. 65% of enforcement actions were issued by the four major agencies, with 16 from the CFPB, 11 each from the Federal Deposit Insurance Corporation (FDIC) and the Office of the Comptroller of the Currency (OCC), and five from the Federal Reserve Bank (FRB) (see Figure 2), the second-highest proportion of action from the primary four observed in the last five quarters. State or local regulators were involved in a total of 14 actions or 22%, making them collectively the second-most frequent actors in the period. The CFPB’s actions centered around unfair, deceptive, or otherwise improper mortgage practices or other consumer lending practices in violation of the Truth In Lending Act (TILA), Real Estate Settlement Procedures Act, Fair Credit Reporting Act and the Home Mortgage Disclosure Act (HMDA), while the FDIC, the OCC, and the FRB issued actions for violations of rules and regulations including BSA/AML, compliance with capital adequacy requirements, and the National Flood Insurance Program. 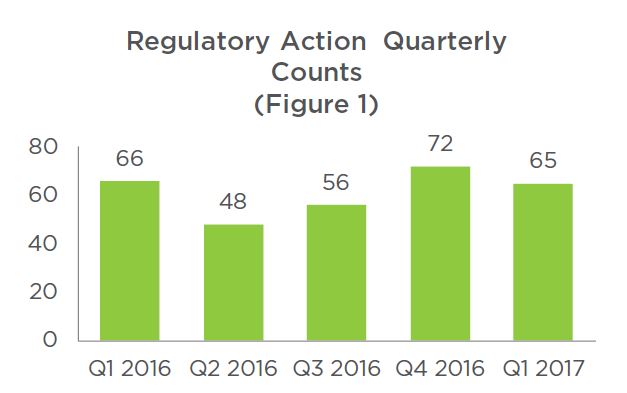 As first observed in the Q4 Enforcement Tracker, the instance of lawsuits brought by state and federal regulators against financial institutions has spiked dramatically in this quarter from the prior four periods. Nine lawsuits were filed in Q1 2017, after 14 filed in the prior quarter, primarily by the CFPB, related to alleged violations of several regulations, including Unfair, Deceptive or Abusive Acts or Practices (UDAAP), TILA, Regulation AB, and Regulation E: Electronic Fund Transfer Act. This count includes January suits against nation-leading student lender Navient and large regional bank TCF. The trend of financial institutions refusing to fold to regulatory action from the CFPB and other regulators, appears to continue into this quarter.

Special thanks to contributors Caitin Cremin and Siwen Tang.

Frequency of lawsuits has increased dramatically in recent periods, with over 50% more in the last two quarters than in the three previous review periods combined, accounting for 12% of all actions in the last year. This trend of financial institutions refusing to settle and forcing regulators to sue is evident in several high-visibility suits.