MelroseWakefield Drives Accountability and Quality, Improves Operating Performance by $17.8 Million in One Year

In August 2017, MelroseWakefield Healthcare (MWHC), a community health system in Melrose, Mass., was facing a fiscal year of financial losses. In FY17, the two-hospital system posted an operating loss of $20.55 million — much of it due to excessive labor and supply chain costs and inefficiencies in operations.

Leaders for MWHC and its parent health system, Wellforce, knew MWHC needed a strong financial and operational turnaround to sustain its ability to meet the healthcare needs of its community. But the health system lacked the internal expertise to drive the level of change needed.

Wellforce and MWHC partnered with Guidehouse to lead a multifaceted project that would strengthen not only the financial performance of MWHC, but also quality of care, safety, and patient access at its two hospitals — MelroseWakefield Hospital and Lawrence Memorial Hospital of Medford (LMH) — as well as its ambulatory locations.

With the pending retirement of MWHC’s CEO in February 2018, Wellforce and MWHC executives worked with Guidehouse to provide interim leadership. An interim executive was first hired as an organizational advisor to the MWHC CEO, transitioning to the role of interim MWHC president and CEO in February 2018. This interim leader was the ideal choice since she was already part of Wellforce, serving as interim chief integration officer for the health system.

Approximately $10 million of MWHC’s annual operating losses could be attributed to declining inpatient volumes at LMH and the high cost of operations. MWHC leaders had already made the difficult decision to close 50 medical-surgical and intensive care beds at LMH, effective November 2017. The decision would reduce operating losses at LMH, but not eliminate them, and more cuts would be needed. In addition to the losses at LMH, MelroseWakefield Hospital’s 2017 performance did not meet budget expectations, with the hospital also experiencing declining census and high labor costs. In fact, MWHC labor expenses comprised 70% of the health system’s operating revenue, well above national benchmarks. 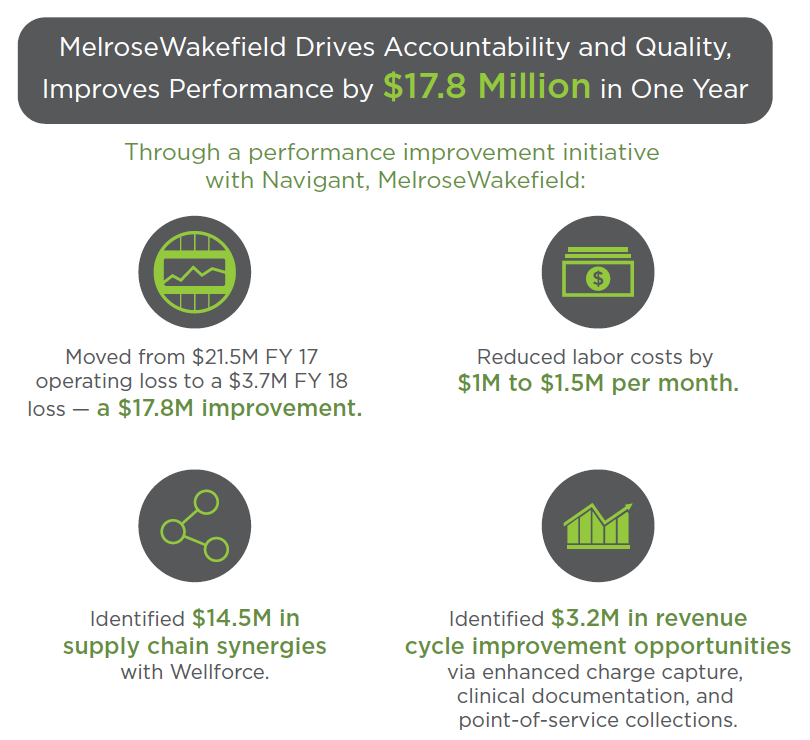 Guidehouse led the MelroseWakefield team through a transformational initiative that pulled the health system from a state of financial distress to one of sustainability and growth in just one year. We’re deeply appreciative of the level of change management expertise Guidehouse brought to its work with our system.