Constantin von Wentzel has co-chaired the Buildings and Grounds committee at the Cambridge-Ellis preschool for several years. In that time, he drew on his professional and other volunteer experience to plan and implement multiple major school improvement projects.

He began by upgrading the external building shell — replacing three ancient factory doors with functional door/window wall systems that allow better ventilation and access to adjacent playgrounds. Constantin made scale drawings and submitted them to the local Historic District Commission, inspectional services, and for assembly into bid packages for local contractors. Constantin also presented the proposed changes to the relevant historic commission and received approval. The work was finished over summer breaks, giving students much better access to fresh air and adjacent playgrounds.

Constantin is also deeply involved in the school’s IT infrastructure. He donated, installed, and programmed multiple network switches and wireless access points. He documented the network and also made wiring improvements to upgrade the network. At the request of the school, he also specified a network video recorder system and installed the server along with nine IP cameras and related ethernet wiring.

His latest project draws on his work-related experience in working with current parents at the school and MassSave. The school is being re-lamped from incandescent and fluorescent lighting to LED-based lamps. Similarly, the current, inefficient HVAC system will be upgraded to allow zoning, improved occupant comfort, and to reduce the considerable energy bill. 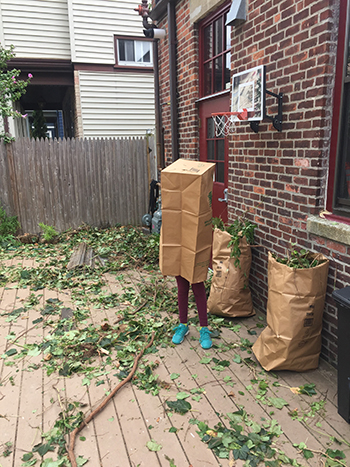