Cryptocurrency robo-advisors, cryptocurrency exchange-traded funds (ETFs), non-fungible tokens (NFTs), and the metaverse—it has never been easier for the average consumer to own and trade or to learn about cryptocurrency.

Cryptocurrency’s market capitalization reached $3 trillion in November. As more cryptocurrency is mined globally, crypto and financial services companies create products and services that aspire to make investing in cryptocurrency more accessible and inviting—such as NFT games, robo-advisors aimed at beginners, and even a potential crypto trading floor included in proposed plans for a casino in New York.

Simply stated, US consumer adoption and crypto-education continues to rise. Meanwhile, US politicians and regulators continue to debate how to fold digital assets into the country’s oversight. On December 6, the Biden administration remarked “advances in digital technology have dramatically improved the efficiency, convenience, and reach of alternatives to cash … at the same time, digital assets have been used in support of a variety of illicit activities.”

There is a balance to reach when it comes to encouraging technology and innovation to flourish while preventing potential bad actors. This became even more apparent as this quarter saw security breaches that led to millions in losses.

Despite potential security concerns, cryptocurrency is becoming increasingly engrained in the fabric of the consumer’s everyday life. Cryptocurrency will be also pivotal in the metaverse, a virtual reality space that has garnered plenty of attention recently and is a signal of products to come, if Facebook’s renaming to Meta is any indicator. Cryptocurrency is in the news, it is on social media, and as consumers familiarize themselves with the concept—it is in their portfolios.

In Guidehouse’s fourth edition of the Two Worlds Colliding Series, we delve into the ever-expanding crypto environment and discuss recent consumer, industry, and regulatory activity on the merging of cryptocurrency with financial services.

Cryptocurrency mergers and acquisitions (M&A) continued a rapid pace this quarter. M&A, including at least one company involved in digital assets, totaled more than 550 deals in aggregate worth more than $25 billion.

Consumer Adoption in the US

US consumers continue to learn more about cryptocurrency and gain exposure to cryptocurrency products and services, with certain demographics leading the way.

Cryptocurrency’s international footprint is growing. The US has offered to “engage countries to help with the analysis and development of central bank currencies in a manner consistent with stability, consumer and investor protection, and countering illicit finance.”

Companies are releasing products and services that aim to bridge the gaps between the average consumer investor, retail investors, and cryptocurrency.

Consumer complaints submitted to the Consumer Financial Protection Bureau (CFPB) against popular cryptocurrency companies rose sharply in the beginning of 2021.

These complaints detail consumer stories about poor customer service experiences, lack of communication from crypto-companies, and difficulties in resolving account or technology issues.

“I’ve been using [crypto-account] instead of my bank for all of my personal savings… Last month, I was traveling and lost my phone, which meant I lost access to my [authentication application] … I followed their protocol… I have now been locked out of my funds for 5 weeks.”

“My [crypto-account] sustained a loss of approximately [$60,000] through a series of unauthorized transfers… [Company] made several demonstrably untrue statements regarding the unauthorized activity, concealing and omitting events that should have raised their suspicion.”

“I created [a crypto-account] and was using the services. I was unexpectedly banned from the service for no reason and they would not disclose why I was banned… I have tried to resolve this with the company and they refused to give me details or support.”

Below is a chart demonstrating the number of consumer complaints submitted to the CFPB targeting popular cryptocurrency companies over time. 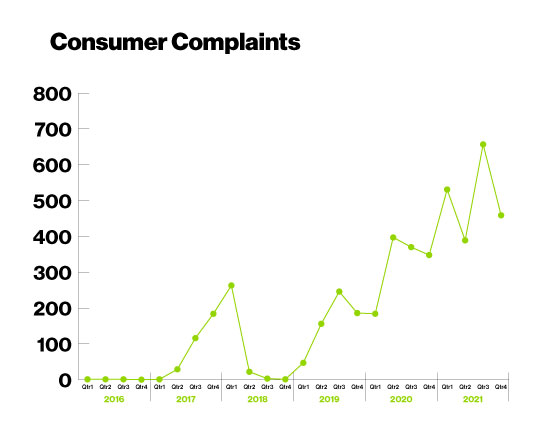 What Leaders are Saying

In the meantime, everyone has an opinion and getting digital assets businesses and governments, law enforcement, and regulators to agree may prove to be a challenge.

"There is a 'decentralization illusion' in DeFi since the need for governance makes some level of centralization inevitable and structural aspects of the system lead to a concentration of power."  Bank for International Settlements

“I think at the end of the day, if it’s really successful, [regulators] will kill [cryptocurrency adoption] and they will try to kill it. And I think they will kill it because they have ways of killing it.” Ray Dalio, American hedge fund manager

“We’ve purchased bitcoin for our own balance sheet, which we believe not only shows that we have skin in the game…but also could provide attractive financial benefits over the long term.” Amrita Ahuja, Block CFO

Special thanks to Shantel Silva for contributing to this article.