The frequency of regulatory enforcement action increased from Q2 2016 to Q3 2016 by a relatively high 17%, as seen in Figure 1, but remains lower than rates observed in other prior periods reviewed in this issue. Approximately two-thirds of enforcement actions were issued by the four major agencies, with fourteen from the CFPB, thirteen from the FDIC, six from the OCC, and five from the FRB (see Figure 2). The CFPB’s actions centered around unfair, deceptive, or otherwise improper lending practices in violation of UDAAP, TILA, and FCRA, while the FDIC, the OCC, and the FED issued actions for violations of rules and regulations including BSA/AML, compliance with capital adequacy requirements, the Servicemembers Civil Relief Act, and the National Flood Insurance Program. UDAAP- and BSA/AML-related violations accounted for the highest numbers of actions in Q3 2016. More importantly, there appears to be a renewed focus placed on TILA compliance, as evidenced by a dramatic increase in related actions in the current quarter (seven actions) from previous periods under review (versus no more than two actions in any one period).

In September 2016, the OCC released their Mortgage Metrics Report for Q2 2016, which provided a summary of mortgage modification data gathered from seven national banks with large mortgage servicing portfolios. The report shows that credit quality continues to improve with an almost one percentage point increase in the number of current, performing loans being serviced from the second quarter of 2015, as well as a decrease in the total number of foreclosures initiated and all home forfeiture actions taken over the same period. These observed decreases in problem loans, however, must be considered in concert with the total size of the servicing portfolios of the seven banks under review. Servicing continues to move to non-depository institutions, as evidenced by the seven percent decrease in the total number of mortgage loans being serviced by these large banks over the last year. 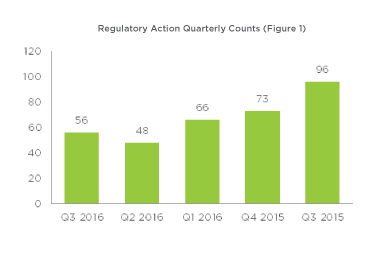 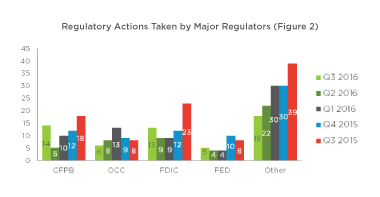