The number of regulatory enforcement actions decreased 13% in Q4 2017 from Q3 2017, as seen in Figure 1, to the lowest level observed in the last five quarters. Sixty-nine percent of enforcement actions were issued by the five major federal agencies, with eight from the FDIC; six each from the CFPB, the FRB, and the DOJ; and five from the Office of the Comptroller of Currency (OCC), as seen in Figure 2. Compared to Q3 2017, the CFPB, FRB, and DOJ all experienced a decrease in actions, while the FDIC and OCC activity remained constant. Despite this decreased activity, state or local regulators were involved in a total of 11 actions, surpassing the FDIC (with eight actions) as the most frequent actor in the period and maintained the top spot for the third straight quarter. 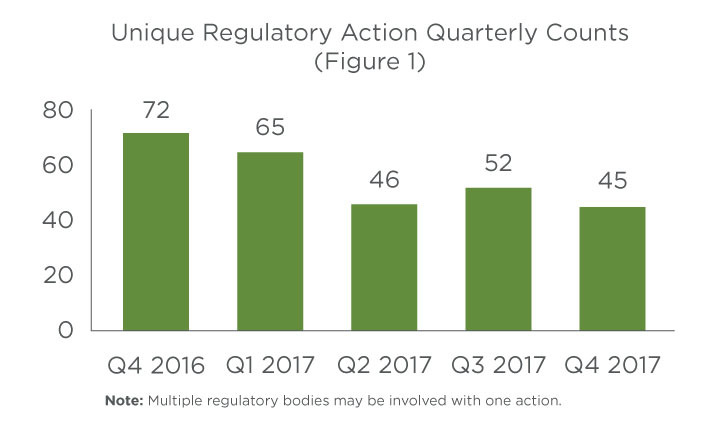 Shift in Leadership Brings New Focus to the CFPB

In November 2017, after increased criticism of the CFPB’s regulation of financial institutions, CFPB Director Richard Cordray announced his resignation and named Leandra English, who was previously serving as the CFPB’s chief of staff, to serve as interim deputy director of the agency. On the same day as Cordray’s appointment, President Trump announced his own replacement, Mick Mulvaney, the current director of the Office of Management and Budget. This announcement sparked uncertainty for the agency, as Mulvaney was an outspoken critic of the agency prior to his appointment and as a congressman, co-sponsored legislation to disband the agency. On November 26, 2017, English responded to President Trump’s appointment with a lawsuit aimed at preventing Mulvaney’s appointment, which was promptly resolved with a ruling in the president’s favor, based on the 1998 Federal Vacancies Reform Act.

The CFPB with Mulvaney at the helm is marked by a more conservative approach to regulation than with the prior Obama-era administration. Mulvaney has stated that in his view, the CFPB’s role is to serve both lenders and consumers, and began his tenure with a 30-day moratorium on new regulation and a temporary hold on payments made to remediate wronged consumers. CFPB enforcement action in Q4 2017 was at its lowest in the last five quarters, with less than half of the number of actions observed in Q4 2016. As a result of this decrease, the agency is not the primary federal actor in the quarter for only the second time in the last five periods.