The recent U.S. Small Business Administration’s (SBA) Paycheck Protection Program (PPP) initially consisted of one round of funding, which was quickly expanded to a second round. The first round included $349 billion and was exhausted rapidly. The second round included $310 billion, and was focused on smaller loans, which led to it lasting longer. Throughout this time, regulators submitted guidelines and recommendations pointing to increased fair lending focus, including:

In anticipation of increased enforcement, lenders should prepare for risks in areas including applicant prioritization, inconsistent handling of PPP applications, and increased customer complaints. Guidehouse anticipates focused scrutiny on the loan-decisioning process and dispersion of loans as part of the fair lending reviews.

Throughout both rounds of funding there were multiple areas of fair lending risk that may arise from lending activities. Below are two example areas with potentially the greatest risk:

Applicant Prioritization & Access to Loans: During the first round of funding, lenders saw large waves of applications, leading many to resort to “gating” practices in processing PPP applications, where lenders prioritize PPP applications of already existing or larger customers. This has led to times where lenders have adopted policies of rejecting applicants that they do not already have a relationship with.

However, restricting or prioritizing applicants inherently introduces the risk that not all applicants, many of them substantively similar in size and situation, will be handled the same. There is also a risk that rejected or deprioritized applicants are disproportionately minority- and/or women-owned businesses.

Insufficient Documentation & Handling PPP in an Inconsistent Manner: In failing to review, update, and apply new and updated guidelines equally for all applicants, lender processors and underwriters may be unclear as how to equitably process applications. This can create an unintentional disparity between PPP loan applications’ processing times, approved loan limit amounts, and documentation requirements. Any disparities stemming from poorly developed lending guidelines can result in heightened fair lending risk.

The above are example risks resulting from increased regulatory scrutiny for lenders. As regulatory entities have increased guidance on fair lending associated with PPP activities, lenders should take steps to mitigate these risks as outlined below.

To address the possibility of regulatory action, lenders should take action to mitigate fair lending risks associated with PPP. For institutions that participated in PPP, Guidehouse recommends the following steps to be prepared for regulatory scrutiny and mitigate risks: 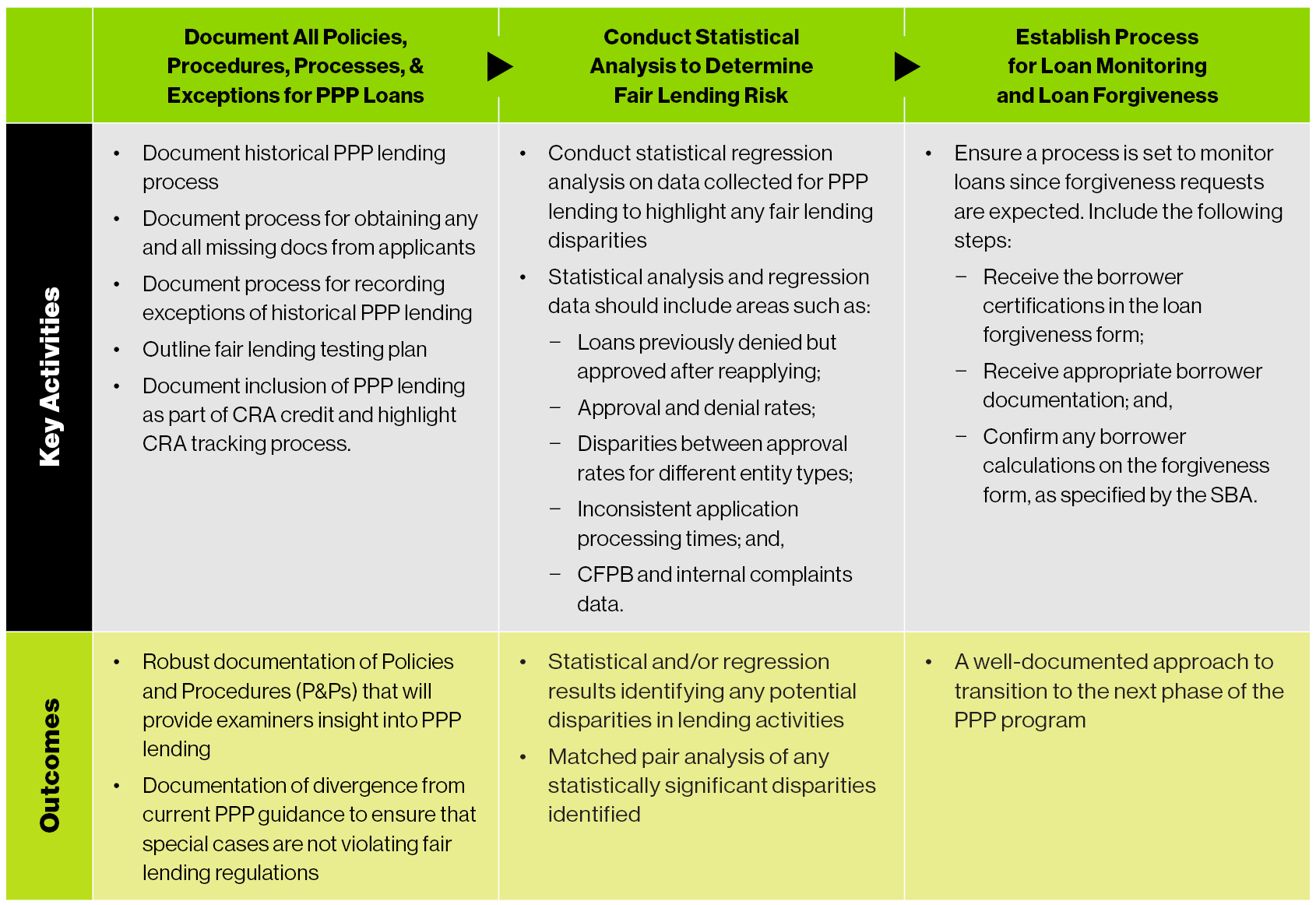 If any of the above areas are not included in formal documentation, lenders should take steps to enhance the procedures and historical decisioning documentation to encompass them. Further, appropriate documentation can not only help ensure appropriate governance over the program, it also promotes consistency among analysts and underwriters.

Performing such analyses will allow lenders to understand any lending disparities and proactively determine if they need to provide restitution for fair lending violations and prepare justifications for any acceptable exceptions in advance of regulatory action.

Establish Process for Loan Forgiveness: Lenders should be prepared for the loan forgiveness component of PPP lending. Based on the current guidelines established by the SBA, a PPP loan is to be forgiven when the lender confirms that the following has occurred:

Next Steps for Lenders

Guidehouse suggests that lenders begin to take the steps necessary to help prepare for anticipated increased regulatory scrutiny. Lenders should prepare by building out an appropriate fair lending review process of PPP loans based on areas including documentation of policies and procedures, statistical and/ or regression analysis, and establishing a process for loan monitoring and forgiveness. Although these steps may not be exhaustive of all fair lending reviews that could be performed on the PPP loan process, these will help establish a solid framework and serve as justification to regulators for lending activities.