A Guidehouse analysis reveals that more states are requiring the use of value-based payment contracts between Medicaid managed care organizations (MCOs) and providers. Learn what this means for MCOs, providers, and states.

The Medicaid managed care landscape is catching up with leading payers and providers in the shift from fee-for-service to value-based payment (VBP), according to a Guidehouse analysis. The findings show that more states are requiring the use of VBP or alternative payment models in contracts between Medicaid managed care organizations (MCOs) and providers. However, the required approaches to these models vary across states. For example:

Let’s dive into the analysis.

Guidehouse analyzed the most recent publicly available managed care contracts between states and their MCOs, as well as current or recently released state requests for proposals (RFPs) from all states with Medicaid managed care programs.

All contracts spanned from 2017 to 2022, with the majority being agreements executed in 2020 or more recently. Identified contracts/RFPs were evaluated for sections on quality management/improvement, provider incentives, and/or provider payments, to ascertain and catalog the existence of any VBP requirements.

For the purposes of this analysis, VBP is defined as the full continuum of evolving payment arrangements outlined in the HCPLAN framework, including pay for performance, bundled payments, shared savings, and capitation. Additionally, many states operate multiple Medicaid managed care programs. This analysis focused on Medicaid managed care programs that serve the Temporary Assistance for Needy Families (TANF) populations.

State Requirements for MCOs to Implement VBP Contracts with Providers

The analysis of the states that have Medicaid managed care (39 states and Washington, DC) shows:

The map below further illustrates states that have included requirements in their most recent contract/RFP for their MCOs to use some type of VBP model in their contracts with providers. 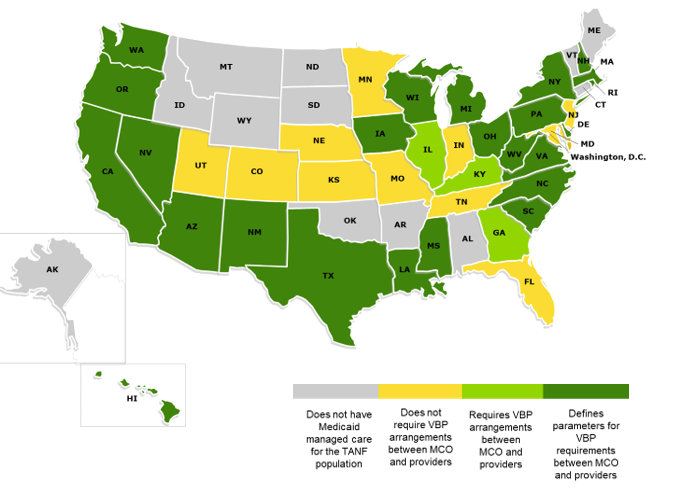 Guidehouse categorized states based on publicly available Medicaid managed care TANF contracts and RFPs. State-specific clarifications: Georgia has not yet implemented the VBP requirements outlined in its contract. North Dakota only has managed care for its Medicaid expansion population. Oklahoma issued a Medicaid Managed Care RFP with VBP requirements in 2021, but the procurement was cancelled.

Among the 29 states that require VBP between their MCOs and network providers, 26 states define parameters for those arrangements. However, the level of specificity and sophistication of the requirements vary.

3 states require VBP arrangements between Medicaid MCOs and providers but do not provide specific requirements or parameters. These include: Georgia, Illinois, and Kentucky.

In general, the majority of states in the analysis rely upon widely used frameworks, such as HCPLAN, to define allowable VBP arrangements. However, some states, such as New York, have developed and use their own definitions.

New York constructed its own framework for VBP arrangements for providers, which includes three levels:

The HCPLAN framework is the product of a public-private partnership aimed at spurring payment innovation in the healthcare system and provides a ready-to-use framework for VBP arrangements of varying risk. Of these 17 states, 10 specify the categories the MCO should use for its VBP program, usually HCPLAN Category 2C or higher.

Louisiana’s most recent RFP for Medicaid managed care services explicitly referenced the HCPLAN framework to guide VBP efforts. The state requires bidding MCOs to propose a VBP strategic plan that meets a glidepath of saturation targets and includes at least one network provider agreement with HCPLAN category 3A, 3B, or 4 no later than December 2023. Further, the state required that the strategy include plans for pushing providers along the VBP continuum to assume greater risk over time, and how the MCO would evolve those models over the contract period.

While not every state that defines acceptable VBP arrangements for their MCO explicitly uses HCPLAN, most of the other states use definitions that align with or overlap across HCPLAN categories. For example, Michigan’s Medicaid managed care contract, while not directing MCOs to use HCPLAN, defines value-based models as including bundled payments and total/limited capitation models, which correlate to HCPLAN categories 3 and 4, respectively.

These states define minimum targets in one of two ways:

11 states require a glidepath or timeline for meeting saturation targets for VBP implementation.

Glidepaths are typically based on saturation targets for the percentage of payments or enrollees that must be in VBP arrangements and usually increase over time. The glidepaths are structured around the contract length and can span three to five years.

Oregon began implementing VBP requirements in its Medicaid managed care program in 2020, using a glidepath that starts with 20% of all payments needing to be in at least HCPLAN Category 2C or higher in year 1. Each year thereafter, that minimum percentage increases. Starting in 2023, MCOs must also have 20% of payments in models that are at least HCPLAN category 3B (Shared Savings + Downside Risk) or higher.

The trend toward VBP in Medicaid managed care has critical implications for states, MCOs, and providers.

With nearly 70% of state Medicaid enrollees under MCOs, and the continued trend toward risk-based payment and whole-person care, it’s important for MCOs, providers, and states to understand the implications of these models and learn from each other for future success.