San José, California—the tenth largest city in the US and the capital of Silicon Valley—was experiencing a significant increase in economic development and population growth that is expected to continue for at least the next 30 years. The city recognized that with finite climate and water resources, it needed a comprehensive sustainability strategy that would reduce air pollution, save water, and improve the quality of life for its residents. San José engaged Guidehouse to develop its Climate Smart Strategy, the first climate action plan for a US city that charts the pathway for sustained year-over-year progress aligned with the goals of the Paris Agreement.

Creating the city’s plan required multiple stakeholders to come together: city departments, related agencies, the private sector, and, ultimately, the residents and community groups. To increase interest, Guidehouse’s team reframed the strategy’s concept as an aspiration, or “the Good Life,” to create a vision for improving quality of life and well-being, which had climate co-benefits.

Guidehouse engaged with San José’s city staff as well as regional energy, mobility, and water stakeholders and community groups to test this Good Life concept. The team also presented at city council sessions and town halls to understand the role of residents, business, finance, and the innovation sector in achieving the Good Life.

Stakeholder outreach was supported by quantitative modelling to develop the business case for climate action in support of the Paris Agreement. Guidehouse’s project team developed an economic model to understand dynamic and compounding effects of 55 climate actions (from electric vehicles to renewable energy, public transit improvement, city densification and autonomous vehicles), working in concert to drive down carbon emissions and estimate benefits against indicators such as vehicle miles traveled (VMT) reduction, renewable energy targets, and building retrofit programs. The team applied an extended cost benefit analysis (eCBA) technique to understand the aggregated effects of capital and operating costs as well as avoided fossil fuel expenditures on a citywide basis and interpreted this through an impact analysis of sectoral impact changes and direct, indirect, and induced economic impacts.

The result was a Paris-compliant strategy out to 2050 focused on achieving greenhouse gas mitigation through Silicon Valley-led innovations in clean energy and transport, city densification, and local job creation, supported by a 3-year city action plan with tailored read-outs for key audiences framed around a Good Life narrative. The plan provides a roadmap for transforming every facet of the city, from buildings, to mobility, to workforce development, to minimize environmental impact and take San José into the next generation of urban sustainability. By emphasizing benefits that improve residents’ priorities, such as affordability, quality time with their loved ones, and pleasant open spaces to enjoy in San José, the plan also generated excitement around tangible issues that mattered to the community.

Under the plan, the scale of the city’s transformation will be significant and may require a commitment of 2.6% of San José’s gross domestic product each year through 2050. However, with climate action comes the economic benefits of energy independence, fossil fuel avoidance, and improved efficiency, resulting in a savings of 2.4% of GDP. The result is a city that is sustainable and climate smart, vibrant, connected, and economically inclusive. 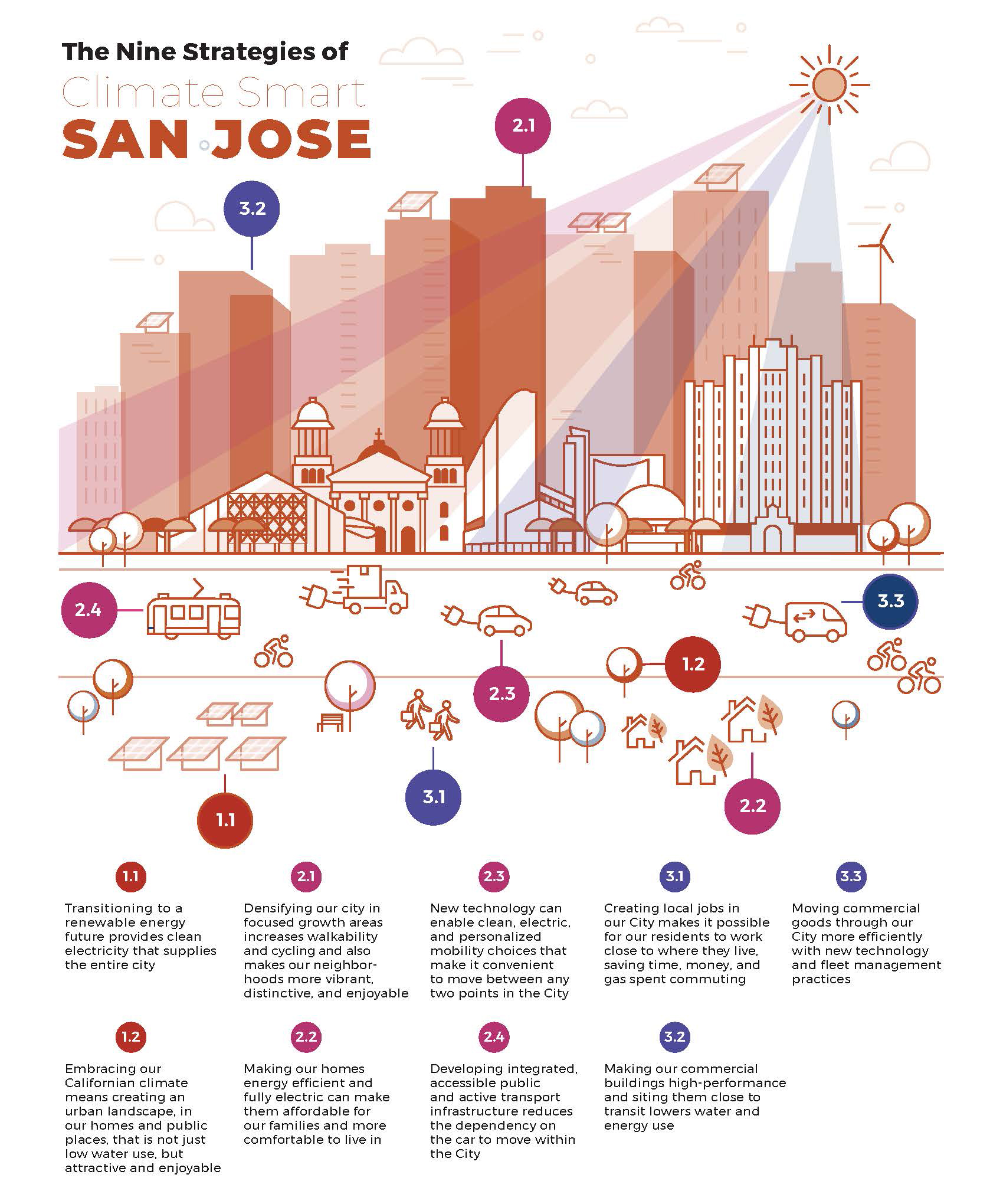 Based on the strength of the plan, San José was awarded funding by the Bloomberg American Cities Climate Challenge grants to drive implementation. As of November 2020, San José is one of 88 global cities named a climate leader by CDP, an environmental impact nonprofit that recognizes efforts in climate action and transparency. San José received credit for robust climate change strategies and tracking and reducing greenhouse gas emissions.