"With Guidehouse's strategic and collaborative support, we are now one of the largest integrated health systems in Illinois."

During a period of soaring merger, acquisition, and reorganization activity among healthcare providers due to the fast-changing environment, hospitals and health systems are seeking better ways to improve and integrate the care they provide and lower costs.

Located in a competitive market of Chicago’s western suburbs, Edward Health Services Corporation’s (EHSC) had a history of strong operating performance and favorable market position. Leaders realized, however, this would no longer be enough to meet the challenges of the new health economy. EHSC executives predicted the consolidation trend would continue and were compelled to explore options for expanding the organization’s footprint to respond to marketplace demand.

Guidehouse was engaged to provide data, perspective, and strategic options for consideration. As a result, Guidehouse guided the EHSC executive and board leadership in understanding and realizing the following dynamics crucial to achieving the organization’s long-term sustainability:

Following the formation of the new system, Guidehouse supported Edward-Elmhurst Health with emerging priorities including:

The first full year of operation for Edward-Elmhurst Healthcare resulted in a strong financial performance for the system. Net income was 52.8 percent higher, revenue increased 9.7 percent, and the new system saw a $22 million improvement in operating income from the previous year.

Three years into the merger, EEH’s fiscal year 2016 income from operations across the system was substantially ahead of projections $17.7 million against a pre-merger target of $9.4 million.

Meanwhile, Guidehouse’s revenue cycle team assisted in the preparing for the implementation of a new electronic health record (EHR) application. Guidehouse’s experts mitigated financial risk by identifying significant build issues with the new platform and providing a solution before deployment. As a result, Edward-Elmhurst achieved 102 percent of baseline revenue within 10 days of go-live. 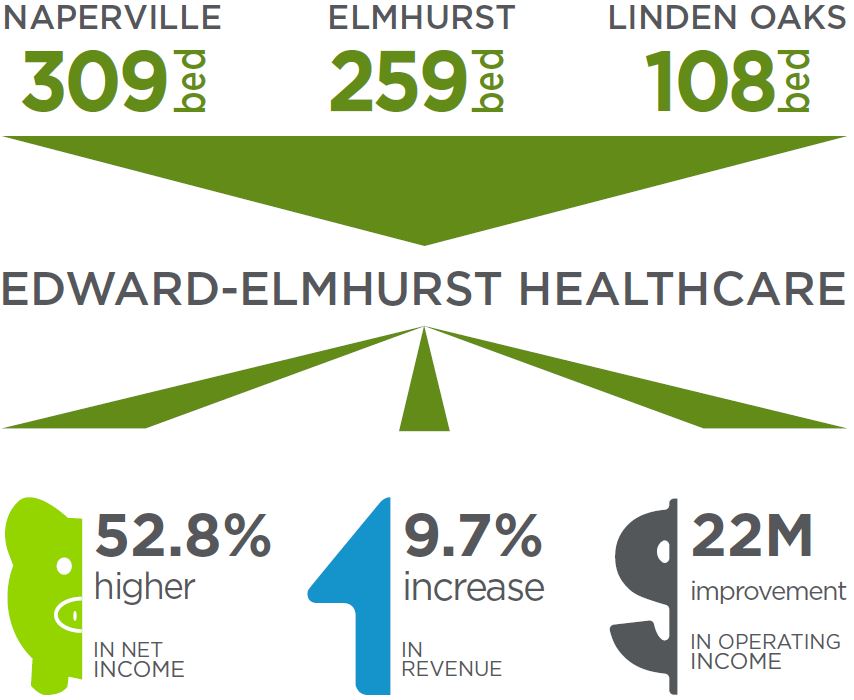 The management team of Edward-Elmhurst Health reached a successful agreement by working hard and overcoming significant challenges. With Guidehouse's strategic and collaborative support, we are now one of the largest integrated health systems in Illinois.